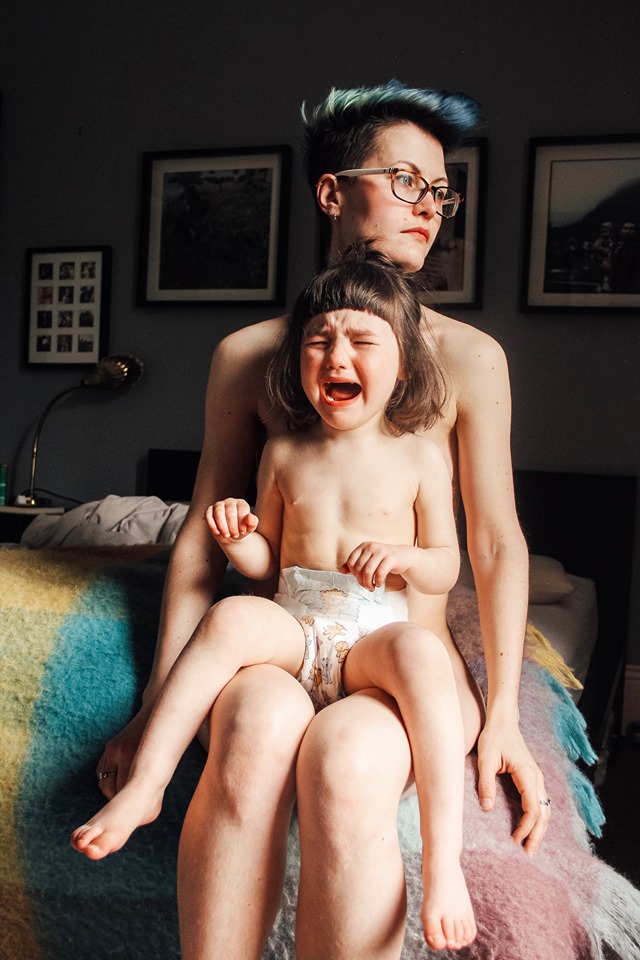 She stands in front of me fixing me with a dark brown and grey stare. Her eyes glinting and wet, jaw set, arm poised to strike again. Hair scraped from the back of her head falls in strands over her cheeks in uncomfortable lines, through her neat fringe, damp with tears and snot. Her small, perfect cheeks are pink with rage, her nose running, patches blotched red around her lips.
Her eyes say a thousand words but those lips say none. Her arm sweeps up again in an arc and abruptly crashes down on the front right section of her forehead. The contact is hard, with meaning and force and her eyes penetrate mine, damp with tears and distress, in pain for her frustration.
Her anger cuts through me and my inability to help her shakes me to my core. Her frustration is vented in this way countless times a day. She cries and screams and her hand slaps down with uncontrolled force on her own head. In public people visibly recoil as she brings down blow after blow in the same spot, all snot and hair and rage. They look at me imploringly and for their sake I get down on my haunches in front of the buggy and ask her to use “gentle hands please”. She strikes out at me and the intake of breath is audible, small tuts or titters of uncomfortable laughter surround me and I am powerless to make this all stop. They don’t understand.

How could anyone who hasn’t had the experience I have understand how this feels? Of course, there are those who long for a show of emotion in their child, who care for children with needs so complex that I couldn’t comprehend how hard that is. There are those whose children harm themselves in frustration, tantrums that turn the objects around them into ways to hurt themselves. For some this behaviour can persist, it could be part of a behavioural condition. Generally though these things pass, they are hard to watch and for some the behaviour will be hard to stop but often the child will understand what they are doing and can hopefully, eventually be bargained with or given reasons not to do it. She doesn’t understand. She won’t be tempted by the promise of tv or comforted by a hug. Her self punishment is an act of frustration but often it is also in anticipation and excitement.

I hope her determination and steel turn her into a strong, independent force one day. I can’t see past this point though, I live one week at a time. And this week, in the summer holidays, has been a really tough one to endure.

This website uses cookies to improve your experience while you navigate through the website. Out of these, the cookies that are categorized as necessary are stored on your browser as they are essential for the working of basic functionalities of the website. We also use third-party cookies that help us analyze and understand how you use this website. These cookies will be stored in your browser only with your consent. You also have the option to opt-out of these cookies. But opting out of some of these cookies may affect your browsing experience.
Necessary Always Enabled
Necessary cookies are absolutely essential for the website to function properly. This category only includes cookies that ensures basic functionalities and security features of the website. These cookies do not store any personal information.
Non-necessary
Any cookies that may not be particularly necessary for the website to function and is used specifically to collect user personal data via analytics, ads, other embedded contents are termed as non-necessary cookies. It is mandatory to procure user consent prior to running these cookies on your website.
SAVE & ACCEPT