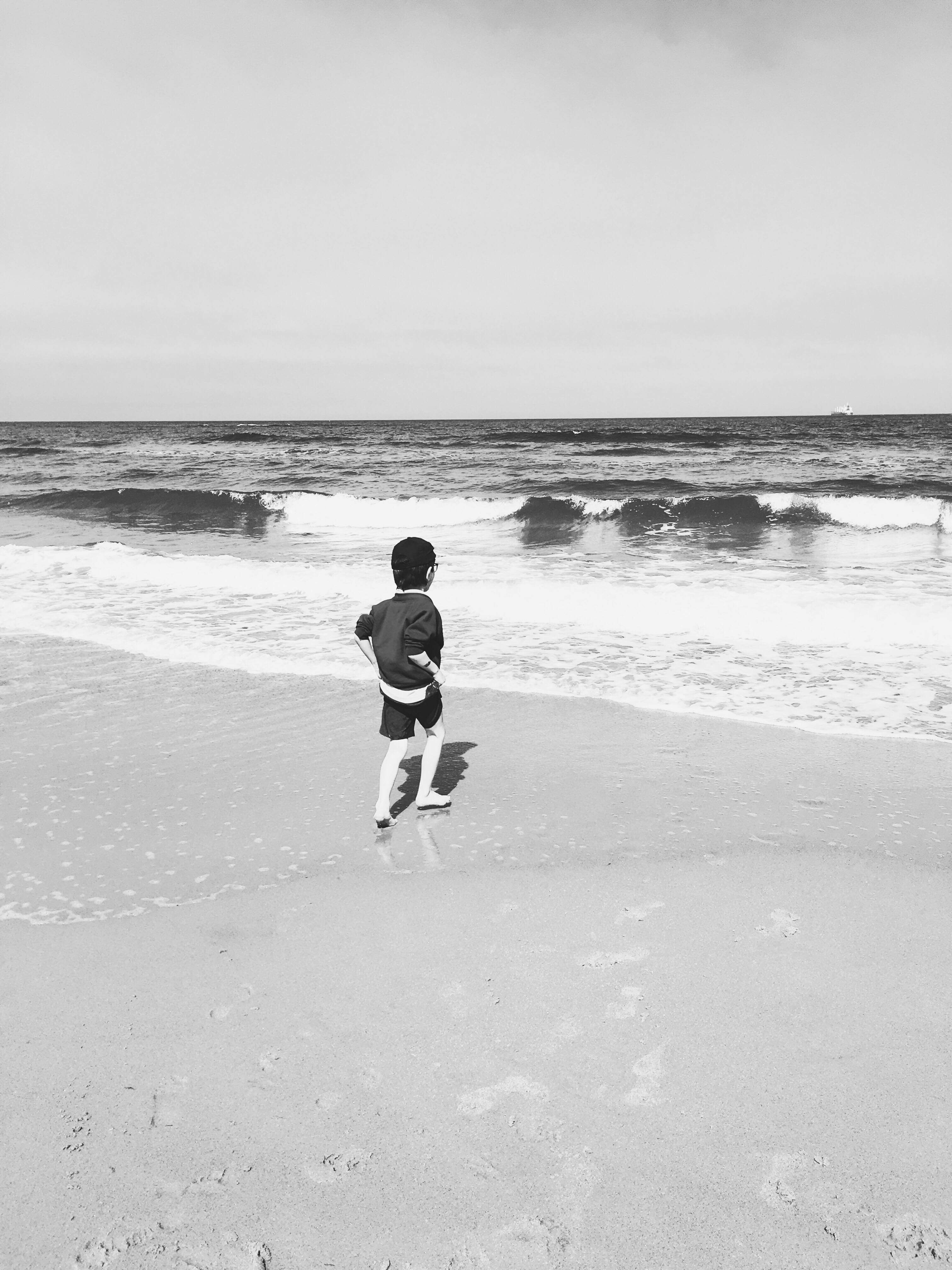 I stand on the beach, the crisp shrieks of kids, tentatively making their way into the surf, crashing into my ears. It is colder than I expected but the sun warms my neck, as I stand here redundant and paralysed with a 3 year old strapped to my chest.
The 5 year old is making his way into the waves, school shorts hoisted awkwardly around his thighs, knees quivering with delight at the after school visit to the beach. He didn’t want to come, I persuaded him thinking it would be nice to do something different after school for once, an alternative to the hum drum of home, school shoes discarded, a vague attempt at an activity abandoned in favour of TV before teatime and the pang of guilt that I don’t make more of the time I can spend with him now.
Why did we come here? Why did I think I could do this? I feel melancholic and overwhelmed. This is not how this is meant to be. It’s meant to be a joy looking after young kids, living through their excitement for the simplest of things. I don’t feel joy, I feel a deep pain and boredom and a need to get away. I want to get into the water, I want to put her down and take my shoes off – I could but this is no small task in a sling. If I put her down she will fill her face with fistfuls of sand faster than I can take my shoes off and pick her up again. I love her but having a perpetual 1 year old (this week with teething pain and a deep distaste for being put down or being anywhere away from me) is stifling and not as rewarding as you would think.  So instead I stand, her small, sharp nails digging into the flesh around my collarbone and look at the sea.  I take a few photos, proof for the online world and perhaps to remind myself that this should be enjoyable.
The boy plays alone like an only child being ignored by his parents, I try to take part but I want to be down on my knees in the sand looking at him in the eye and really relishing whatever slimy piece of seaweed has invoked such a response in him. Instead I am cursing him under my breath for making sand angels and filling every known crevice with beach before we go to the café and inevitably I conclude that I shouldn’t have bothered promising we go out to tea – that this is not a task I can easily manage alone and should probably have not bothered.
It was fine. A sand drift under our chairs, impatient cries of “play with me Muuuuuum” from him and cries of annoyance from her at who knows what and a mediocre meal served up by bored waitresses.
I often don’t really feel like I am here; time washes over me, like the waves on the beach below. I feel like I am stuck in a strange flux, on one hand lamenting the opportunities missed with him because I am encumbered with a perpetually young child and at the same time reminiscing over how much more fun it was looking after the child he was. A child who could really communicate, who could have a reasonably meaningful exchange with me once he could talk, who loved to play with playdoh and draw and read books and run in the park and stack blocks… she has no interest in any of this, or isn’t physically or mentally able yet and it makes me feel so guilty but I crave more than she can give me right now.
Everything I do with them is punctured with this disparity of needs; I feel the pull of them in opposing directions and I just want to scream. I know this is the case for lots of parents, this is a normal part of having more than one child, particularly for single parents, but the shift is quicker, the younger one catches up, the older one becomes more tolerant but this, here, right now is so hard.
I am not mindful and I await tomorrow with open arms, impatiently getting each routine moment done and over so I can move on. I am just working towards each nap time and bed time until I can relax and think about something else. I am not a bad person, I am not a bad parent, I know this is all a perfectly normal reaction to having two kids, one with severe global developmental delay and all the worry and paperwork and appointments that go along with it, but it doesn’t feel very normal to stand on our beautiful coastline and feel bored and guilty and stuck. I want the day when my kids can run together into that painfully cold North Sea to be now and I want to hear their shrieks as its ice cold chill smacks their thighs. I want to run in there with them and no longer feel paralysed.

My online antenatal classes provide professional, practical and personalised sessions for all expectant parents to be better prepared for...

This online Relax & Breathe course is about simple and effective techniques for pregnancy, birth and when your baby...

Welcome to your baby massage course

This baby massage course is about simple and effective baby massage techniques which can soothe and settle your baby....

This online weaning workshop has been designed to take the stress out of introducing solid food. Weaning can be...

After working with parents throughout the postnatal period for several years, I am now creating an online course to...