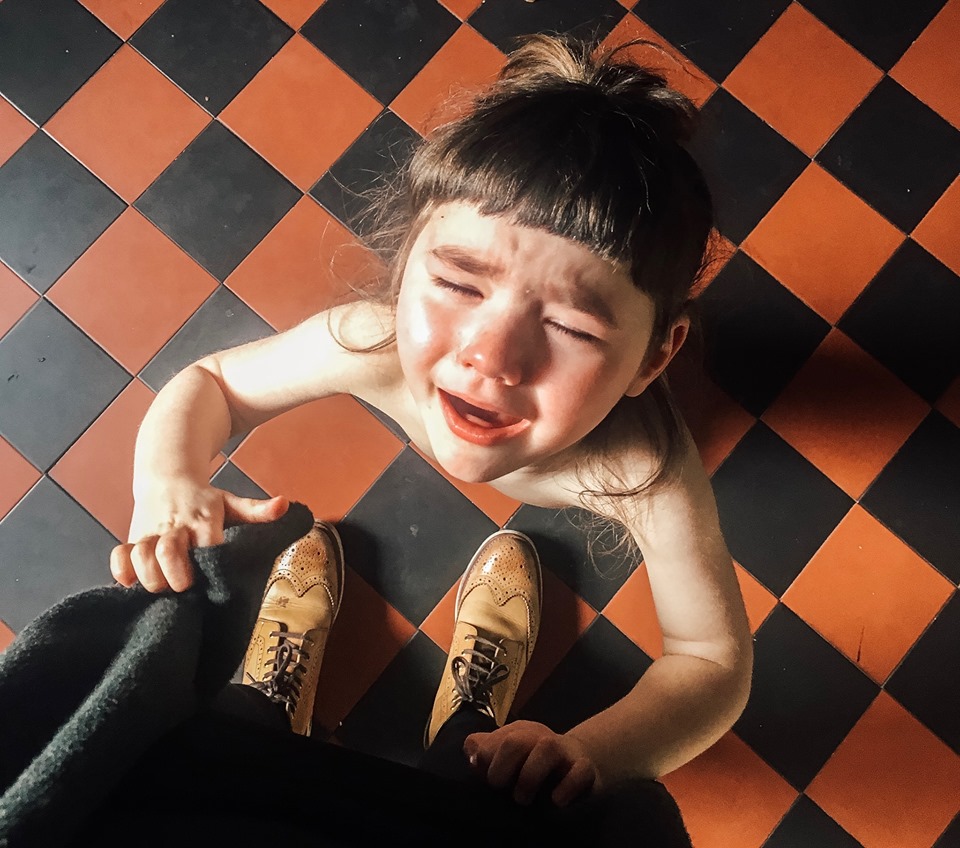 As a family with a child who doesn’t always display typical behaviour, life often presents us with some interesting interactions with the general public. I spent much of her former years managing the expectations of strangers: “no, she isn’t tired, she has early onset epilepsy and is having absence seizures”; or “no she cant wave, she’s severely developmentally delayed, don’t take it personally”; and “no, she can’t say ‘hi’ but thanks for pointing out that she’s in a grumpy mood today” before giving up entirely and learning to smile and nod.

It has become apparent since having kids, even an older child with no additional needs, that as a society we presume to know what is best for other people’s children. From the moment we are pregnant, women are judged and preached to about our decisions: I’ve had everything from glares across a room because I was drinking something that looked like a gin and tonic while breastfeeding (it was tonic water, but who are you to make that decision and FYI there isn’t a direct tube from my face to my boob…!)  to stricken old ladies flapping around my apparently suffocating baby in a sling (tied and used according to T.I.C.K.S guidelines). These are extreme examples and generally it hasn’t been too bad; I’ve developed a self confidence as a mother that I have never before possessed and the ability to shrug off most well-meaning comments with a “thank you for your opinion…” leaving them to their self righteous, indignant looks of disgust as I move on my merry way. Opinion is always going to be divided on what is ‘best for baby’ and we need to learn that, as humans, we are all individuals and what is best for some is not best for others.

However when the subject of these comments was my husband this weekend, in a crowded Tynemouth Market on Saturday morning, I was less than forgiving.

We rarely venture out as a whole family. It’s hard to maintain a happy sense that making this effort is worthwhile when we both become distracted with our daughter’s needs, our son gets left out and inevitably we abandon the outing feeling dejected and like we should go back to what we usually do: avoidance and divide and conquer. There are certain things we can’t do with her because she gets upset, or is just generally unsettled, so instead of driving 45 minutes to a National Trust site we settle for a walk around Shields, because, to be honest, she doesn’t care either way. We spend much of our weekend separately, taking turns with the kids so one or other of us can have some downtime, catch up on household tasks and it takes its toll on us. We often have to divide the kids, because despite there being just 2 years and 9 months between them, with her delay and his uncanny aptitude for science and investigation we can rarely find something that will suit them both. Even though time with both the kids isn’t really time together and we barely get to glance at each other let alone have a meaningful exchange, it’s nice to occasionally spend time in the company of the man I have now been with for almost half of my life.

The market was crowded, but not so busy that we couldn’t let Harper walk around a bit while we attempted to negotiate our way to the excellent coffee stand ‘Regular Jo’s’ on the far side of the station. Our 6 year old son tugged on my sleeve and impatiently demanded to go to the stall where the Lego figures were sold (his weekly pilgrimage to spend his newly instated pocket money) and she walked in circles and screamed as metros passed. We got our coffees and decided that she should be in the sling for a bit while we had them to avoid mishaps (if she kicked off it is hard to pick up a squirming toddler with a flat white in a Keep Cup in one hand). She got upset before she was even in the sling because we wouldn’t let her have a large bottle of water that she had spotted in the bag, (which I had intended on leaving in the car but forgot – I know she loves squeezing it out everywhere and sitting on the floor of a busy market patting a puddle of water isn’t very practical). She regularly kicks off like this, it’s a toddler thing and a Harper thing and we all know it all too well. Distraction is often the key but sometimes there isn’t much consoling a child who has their mind fixed on an idea, especially a child who has no other way to communicate than hitting and screaming. Sometimes I can sing to her and make her laugh, sometimes it subsides on its own but it’s a daily fact of life for us that she is regularly upset to the point of ear splitting screams and floods of tears, often subsiding as fast as they have begun. We just have to get on with it.

It was on the back of this upset that a complete stranger approached my husband. We had been separated slightly (I was with our son and topping up the sippy cup with water out of sight in case it was genuinely that Harper was thirsty) and when I caught up to him I could see him talking to an older woman who I didn’t know. At first I thought it was just a polite exchange but as I approached I realised he was trying to laugh off something she was saying to him. As I got closer I could here her chiding words: “Good parents comfort their crying children…” Oh. No. She. Didn’t…

I was livid, instantly incensed by the audacity of some stranger to not only judge the ability of my husband as a caregiver but to suggest that he wasn’t a good parent? I immediately took up the argument. I don’t remember exactly what I said but I do know that the first thing I mentioned was the fact that she has severe additional needs (a fact I knew he would have already pointed out). She is easily upset by the smallest of things often leading her to hit herself and us because, despite being 4 years old, she can’t talk.

Having to justify her behaviour to people has two effects on me; it angers me to have to do it and it saddens me to the point of tears as I am faced with my reality in the eyes of someone I don’t know and how much I would really rather it wasn’t so. But it is. I was incredulous that she didn’t take back what she was saying and was just told over and over that she was concerned for our child’s wellbeing and that the 300 other people in the market were also worried for our little girl. Worried doesn’t cover what we go through with our daughter: she is 4, has an undiagnosed probably genetic, deeply complex condition of unknown cause and, with no prognosis, we have no idea what the future holds for us or her. We understand concern and what this woman was expressing was not that. She had clearly made a mistake and I would like to think was too embarrassed by this stage to back track but perhaps not. I honestly couldn’t care less that she might think us bad parents, she knows nothing of the lengths we have been to for our daughter in particular but, to be honest, she has no right to comment on anyone’s parenting ability.

As a society we are quick to judge, social media has emboldened us, giving our opinion on anything and everything and this woman clearly felt it was necessary to say something, under the guise of concern for a child but quite possibly because she didn’t want to endure the din that we have become accustomed to. Whatever her reasons she was wrong. My husband is the best possible Dad to his kids: he is loving, dedicated, supportive and energetic. He works incredibly hard both at work and at home and rarely gets time off either job. The thing that upsets me most is that this person managed to make him feel, if only for a second, that our presence in this public place was negatively impacting others, which I don’t care about, but that he will probably worry about in future. I don’t want this incident of ignorance to knock my husbands’ confidence, he is a worrier as it is and is mildly anxious about interacting with people anyway. So the fact that she had said this to him, rather than me, really riled me.

What upset us the most though was the realisation that this will inevitably keep happening. As she grows up, what is initially seen as ‘cute’ behaviour will turn more heads as it becomes less acceptable for an older child who ‘should know better’ to behave in a disruptive way. Unfortunately I don’t have this woman’s address so I cant write her an equivalent, excellently worded, sarcastic letter as the father of an autistic boy did this week to the King’s College Dean after his family were removed from the Chapel because of the overenthusiastic noise his son was making. There was a formal apology but it just goes to show how far we have to go as a society in remembering that we don’t all fit the mould.

We are both blessed and cursed that Harper’s disabilities have no outward appearance. She is ‘cute’ and looks so similar to how my sister did as a child that their photos are often indecipherable. However this leads to people misreading her inability to interact as they are accustomed as rudeness and, for lack of something else to respond when I politely inform them of her complex needs, they simply say “oh, but she’s beautiful though isn’t she?” I know it’s not out of malice and often will just be the first thing they think to say but its as if her outward, admittedly aesthetically pleasing, appearance somehow compensates for her inability to fully communicate her needs; makes her undiagnosed condition easier to digest. I am grateful that we are able to move through crowds of people unnoticed, without staring onlookers and, blessedly, without a wheelchair or other typical signifiers of disability that we are accustomed. Too often though, because of the media and our obsession with “perfection” there is not enough being done to make disability and additional needs seen.

In the market, when it was over and the woman finally walked away, I burst into tears, thankful for my sunglasses and more upset that my son was seeing me distraught (he had stood by my side through the whole thing). A wonderful passer by, who had caught the end of the argument, came over and said “don’t you dare let that woman affect you, I have a 22 year old daughter with autism and this used to happen to me a lot. I used to give out cards to them and walk away. Society isn’t understanding of our situation”. It was wonderful to know that we aren’t alone and I am incredibly thankful for her kindness. I know that for all the ignorance there is a lot of compassion and understanding, people who will ask if there is anything I need when she is kicking off and it’s all too much and people who understand just how hard this is.

So now I just need to compose some cards to hand out to future ignorant arseholes and learn to walk away.