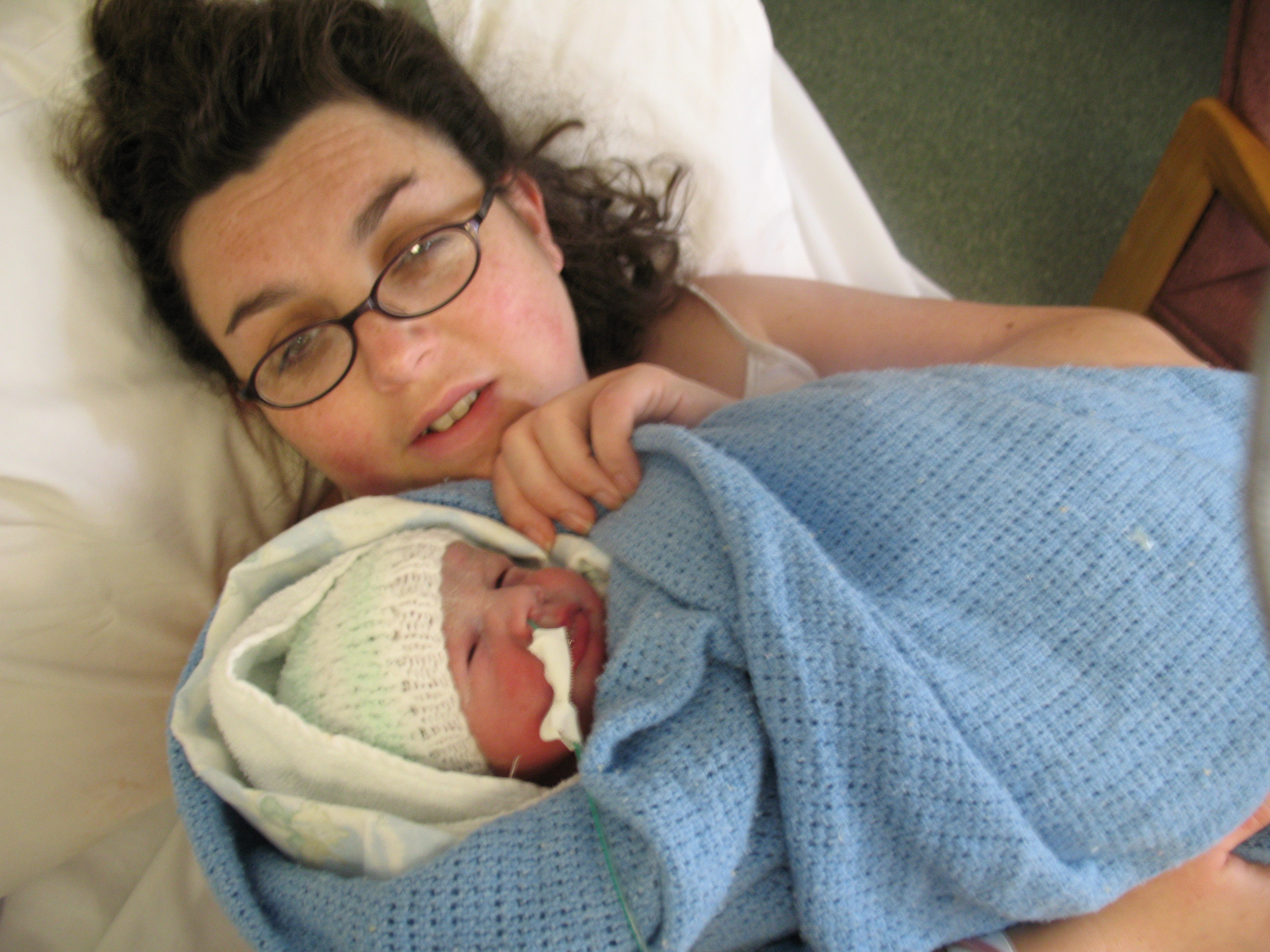 I experienced birth trauma after the birth of my third baby 12 years ago, which left me with PTSD. Initially it was assumed that I was ill because my son – who was born with a severe heart defect – died during heart surgery when he was 3 days old. But it was only when I started seeing a psychotherapist who specialised in grief and trauma that we worked out that beyond the grief and trauma of losing a child, there was also birth trauma.

It was a complex trauma of grief with the impact of an emotional pregnancy and the death of my baby. Being pregnant with a baby who had two life-threatening defects was emotional torture in many ways – with additional scans, discussions with consultants, a great deal of hope, a great deal of despair and helplessness, along with plans for his birth, if he lived that long and an attempt to prepare for early life in the heart unit. If Jamie had lived, we faced months in hospital with him so there was no normal to plan for. And within all of this was a need to know that my young girls were ok and looked after – they were just 2 & 5 when I was pregnant and I will never know how much this impacted on their life, especially after he died and when I was struggling.

My labour and birth was straight-forward – it was my third baby, it was quick and I had great support from my husband. But there was a problem with my placenta and it didn’t want to come away.

I briefly met my baby boy but he had to be whisked away to SCBU and I sent my husband with him so then I was on my own – I started to feel a bit vulnerable, I was scared and I didn’t feel like anyone was looking out for me. On reflection, I do also wonder if my placenta stayed put because the room was full of people, I didn’t get to cuddle my baby and I was tense. Had it been calmer, maybe it would have been more straight-forward.

I was taken into theatre, I needed spinal anaesthesia and my placenta needed to be manually removed. On paper it was a straight-forward procedure, my placenta didn’t put up a fight, there was no bleeding, I was safe. But I wasn’t with my baby, I wasn’t with my husband and I had a group of anaethetists trying to administer the spinal. No body talked to me or even acknowledged me and then I started crying, all of a sudden it just felt too much. I remember someone saying “oh look, she’s crying” but still no one asked if I was ok, no one comforted me. I didn’t know if I was going to be ok, I didn’t know if my baby was ok.

The spinal was still not administered. And then there was the firm voice of a consultant anaesthetist who marched in, ordered the others to get out. He took over, my spinal was administered in seconds, he put his hands on my shoulders and said, “it’s ok, I’ve got you”

He stayed, he talked to me and he held my hand as the obstetrician removed my placenta. It feels like it lasted forever but it was probably not long at all before I was moved into the recovery area.

It’s not a common procedure, it’s not a pleasant procedure but I do wonder if it would have left less of a mark had I felt more supported and looked after when I was very vulnerable. This may not make sense to many people but I felt violated as a result of the procedure. And the affect of being ignored and feeling unsafe have stayed with me. I am eternally grateful to the anaesthetist who took over and showed respect and compassion.

After our initial grief and adjusting to a different life without our baby, life continued on as much as normal as possible – the girls were in school, we went back to work, I cried a lot and slept a lot but also talked a lot and we just kept on going and I focused on our little family unit. It was a tough time and much of what happened in those first couple of years, I can’t remember at all. It was almost like I was on autopilot. And I kept busy. Being busy was important – I was busy with the kids, with work, I volunteered.

And then I started to become ill – more emotional and stressed, more anxious so I dealt with it with distraction and being busy and then I crashed, one day I just couldn’t function. I couldn’t leave the house, I was full of panic and anxiety – I felt like someone had pushed me out of a plane with no parachute. It was terrifying and it left me with a depression and a tiredness that I struggled to deal with on my own.

Despite struggling with depression and anxiety – I was always able to look after my children and I was able to work. And the rest of the time I would want to sleep. But I reached a point where I was scared and I felt overwhelmed at having to do it all myself. The anxiety was getting worse so I attempted to talk to a GP about it.

The first GP said she didn’t want to refer me for counselling as I had friends to talk to but she would prescribe me Prozac.

The second GP just told me off because I was late for an appointment, although I didn’t know I was late for the appointment. Whose error it was I don’t know but I know it was on a day that I was struggling to function so I cried and left.

I continued to struggle on for a bit longer until I broke down again, everything was on top of me, everything caused stress, I had screamed at my beloved eldest child for being a child and I just knew this couldn’t continue.

The third GP extended my appointment,  she listened, she immediately referred me for grief and trauma therapy and we talk through medication options. The Prozac that had been suggested by one of her colleagues was immediately dismissed because of my anxiety and citalopram was chosen. I came away with less weight on my shoulders, I felt less alone and like there was a plan for dealing with my madness.

It took 18 months to see the therapist – my GP had to chase it up several times. I don’t know what the delay was but I was lucky, the drugs were working, life was working and I was generally ok.

I saw my therapist almost every week for a year and I could have kept seeing him but we reached a point where I felt I was more in control, calmness had resumed, I was off the meds and I felt like I could start living again rather than just coping. I feel incredibly fortunate that the therapist was the right person for me – straight-talking, kind and brilliant. Many of these sessions were hard, taking me back to the rawness of being in that operating theatre or the rawness of losing my baby, but I needed this opportunity to deal with it head on, rather than constantly keeping busy.

A number of sessions also included EMDR – a therapy designed to alleviate the distress of trauma – and it was the most effective therapy for me. Now when I have a flashback, I relax rather than experiencing tension and panic.

I’m really lucky, life is good but it was been a long and emotional. Experiencing depression, anxiety and being diagnosed with PTSD has meant I have to focus on me and looking after myself. I know what impacts me – mainly stress and doing too much without any down time – and what I need to be well and healthy – standard stuff: walking, fresh air, not too much booze, talking, eating well, reading well, writing stuff down and family time.

For me, the citalopram worked well, the therapy was very effective and I am also fortunate that I am well supported. It’s not completely gone, I have to invest in my own wellbeing and I can sometimes feel quite tired and fragile but that feel more normal than extreme now. The anxiety is still there at time but less than ever and I feel like I am controlling it more than it control me now.

If you are experiencing any pregnancy/birth trauma, please reach out and get help. It is such a personal experience and it can range from mild to crippling but some form of therapy could be needed, to make a difference and to enable you to live rather than cope.

As a practitioner, I speak to many people about the births of their baby and I am trained and experienced in providing birth debrief sessions – this always includes a discussion about what else a woman may need and this can include talking through notes at the hospital, seeing a GP for a referral for therapy or seeking private therapy.

“I really struggled after the birth of my son – I had a birth debrief session with you and it made such a difference because you put me on a path to dealing with it. I went to see the head of midwifery who went through my notes with me. I wouldn’t have done this if I hadn’t had our birth debrief session.”