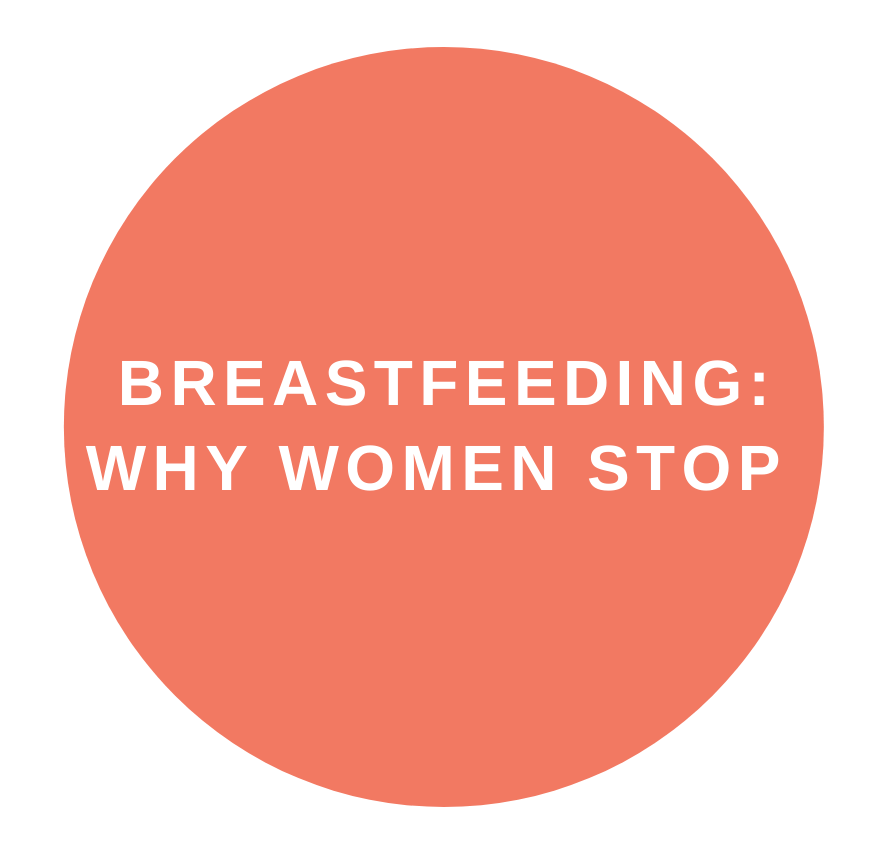 Why women stop breastfeeding can be complicated. The UK has the lowest rate of breastfeeding in the world – only 1 in 200 women breastfeed their children after they reach their first birthday. Statistics show that 80% of women start breastfeeding at birth but half of those babies have formula by the end of the first week.

Breastfeeding author Dr Amy Brown surveyed women who had stopped feeding, she found that 80% of the women who stopped in the first 6 weeks didn’t want to stop but felt that they couldn’t continue. Brown states that the vast majority of women who stop feeding do so due to their experience rather than an inability to feed.

As a practitioner who works with postnatal women much of my work is about reassurance and normalising feeding, sleep, growth spurts and meeting the changing needs of a baby.

In my day-to-day work I see a couple of issues around why women stop breastfeeding.

Why women stop breastfeeding: our culture sets mothers up to fail

We have unrealistic expectations of routines, sleeping through the night and independence.

Every baby is different but it is so normal for babies to need and want to cling and to be close to his parents, especially mum. Biologically babies are meant to wake in the night for food, comfort and reassurance and they are unable to settle themselves if they are upset.

This can make breastfeeding hard and it can knock the confidence of a breastfeeding mum who is concerned that she is not making enough milk for her baby or that she is doing something wrong because her baby wakes frequently in the night or won’t settle away from her. I am in no way against formula – at all – but it has been sold at the saviour of parents who want more sleep, babies who feed less often and babies who seem more settled. The bigger picture is that is has undermined the normal behaviour of a new and young babies and our expectations are often not based on the reality of life with a new baby.

Why women stop breastfeeding: the lack of consistent support and services

There are a few different feeding issues which can be difficult to correct due to a lack of funding and breastfeeding services.

Slow weight-gain – mums need support and reassurance and there may a reason behind the weight-gain such as food sensitivity or a tongue-tie. A feeding plan could also make a huge difference to milk production and weight gain.

Tongue-tie – this can have a huge impact on feeding if babies are unable to feed well and if nipples are sore and becoming injured. There are currently not enough trained health professionals who can diagnose and treat a tongue tie so many are missed and waiting lists for referrals can be long. With support, some women are able to persevere and keep going but others have to stop because it is too damaging physically and mentally.

Painful feeds – this can be due to a tongue-tie or it could be due to a problem with positioning and attachment. Some breastfeeding support can help with this but there are not enough breastfeeding specialists within the healthcare system to identify and correct simple feeding issues, as well as provide support and reassurance to women who want to continue to feed.

If you plan to breastfeed, it can be helpful to know where to go for support and to have this in hand from the end of your pregnancy. Find out about…

*breastfeeding specialists who are trained to provide support: La Leche League provides reliable and professional support but also ask your midwife & health visitor if there is anyone you can see in hospital and when you get discharged from hospital.

I also just want to add that for some women, breastfeeding is a lot tougher than they ever imagined and they don’t want to continue to breastfeed, even if it is straight-forward. It’s a choice and, even with support, breastfeeding can be demanding and overwhelming – not everyone wants to do this.

Some of the postnatal women I work with want to combine feed so they can share the responsibility of feeding; some women just don’t enjoy breastfeeding and others just want to switch over to formula. Feeding is such a personal and emotional experience that mums can only make the right decision for them, based on how they are feeling at the time.

“I wanted to breast feed. I had a tricky birth due to retained placenta, I then caught an internal infection and ended up on lots of antibiotics. My milk didn’t come through for over two weeks and by then formula was established.”

“I stopped breastfeeding for a few reasons – my daughter had a tongue tie so could only latch properly with nipple shields, feeding in public was really difficult and that really started to have an impact on my mental health because I get cabin fever so badly. I later switched to just expressing and giving her that from bottles, but I found that really difficult too – on the day I heard myself pleading with my daughter to be quiet in her crib so I could get through some pumping I realised that I was actually missing out on spending time with her, and the bonding that comes with that, and decided to reprioritise. I absolutely take my hat off to anyone who can make it work but, for me, I found mothering much easier when I stopped.”

“I tried and tried and tried but my daughter just kept losing weight. We were in and out of A&E, had feeding observations by paeds, absorbency tests, diabtetes tests, endocrine investigations. And i just kept trying. Eventually i got mastisis and my husband came home from work with formula. I cried with relief. I had wanted to stop long before but because i knew my baby was poorly i thought she must need my milk to get better ane just didnt think it would be ok to stop. She gained that week on formula!”

“My baby just couldn’t latch well and it caused her and me alot of pain. She would arch her back and squirm, get so much gas we had to wind her for an hour after a feed, which meant she was then needing another feed (on a good day). I got mastisis, and it was altogether an incredibly overwhelming and emotional time. We had to top up right from the start because she was losing too much weight. I put alot of pressure on myself to carry on and I ended up expressing and feeding til she was 3 months. Then we saw a lactation consultant who said she was tongue tie. I went to full formula and we immediately both were happier – I had more time to spend with her cos I was no longer pumping all the hours – and we just enjoyed the feeds.”

If you and your baby are experiencing struggles and challenges, please make sure you get some support for you as well – you can get involved with Mother Cuppa Postnatal Groups and see a breastfeeding specialist to get good feeding support and reassurance if you want to continue to breastfeed.

Janine Smith | A specialist in pregnancy, birth and early parenting