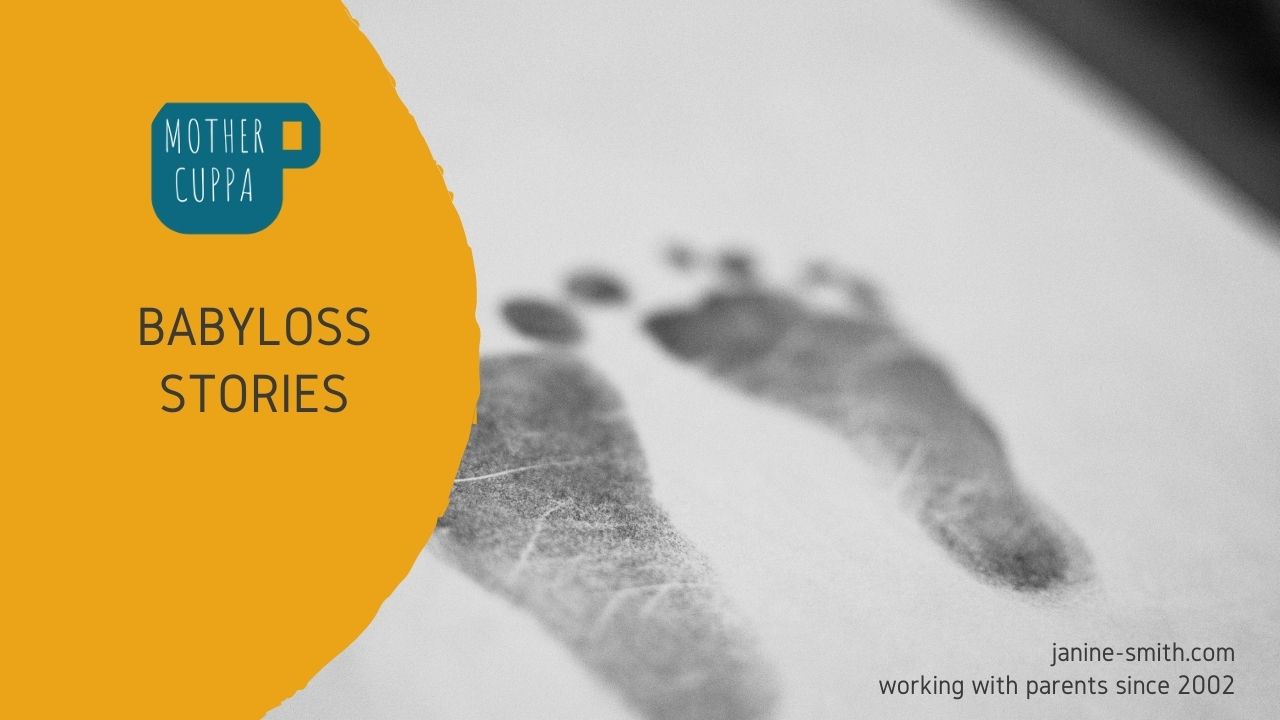 I asked parents for their babyloss stories – these are raw, real and graphic but this is the reality for many parents so I wanted to share these stories, in parents’ own words…

“I was only 18 when I had my angel, I am 37 now. I was unaware of monitoring movements as it wasn’t something the midwives talked about. At 32 weeks I felt ill one day, didn’t think anything of it until that night when I started to get pains, then vomiting so I went to the hospital. I was scanned and told there was no heartbeat.

I was taken to a room on my own and sedated. The next day my labour was started and by that night my beautiful, perfect little girl was born sleeping. My mum and my partner were with me.

The two midwives I had were amazing, they explained everything they were doing and were so attentive. The hospital were great – my baby was with me in my room and my partner’s parents were able to join us as well. The hospital took photos, hair clippings and foot/hand prints.”

“My first loss was at 13weeks, it was my first pregnancy and we attended our scan with a leap in our step and so much love in our hearts. We’d planned and tried and were very lucky to fall pregnant within a month! As they started the scan, my heart sank and there was no movement, just a grey baby laid still. The room went silent and we heard the words ‘I’m sorry there’s no heartbeat’ I think my world broke a little right there. We sobbed as they told us I’d suffered a ‘missed miscarriage’ unfortunately to us there was nothing missed about it, we were utterly heartbroken.

I birthed our baby the day after with the lovely support of the midwife. However I wished someone had told me that when the time came it felt like I’d need a poo, as I locked the toilet door for what I thought was a poo and I birthed alone, unable to reach the door to my husband on the other side hearing me scream to the sight of a lot of blood and a very small baby.

We fell pregnant again, three months later. I attended A&E in pain at 8weeks pregnant. Due to a high levels of white blood cells in my blood we believed I had appendicitis and a very compassionate surgeon came to say they would remove it and be mindful of the baby. I haemorrhaged in a bay with 4 other ladies on a surgical ward. Unfortunately I miscarried and was placed under the care of Gynae for one night before I was scanned and told there was no baby and discharged from hospital.

I completely lost all faith in my body, surely carrying a baby is my role? My job? But yet my body rejected my baby.

I conceived again, almost immediately and was scanned every two weeks. At 8weeks we were told we had a ‘failed twin’ pregnancy, one of our babies had no heartbeat’ but we had one healthy strong heartbeat and I was blessed to carry my son to full term. He’s now 4 and due to start school and I often look at him with a bittersweet emotion of wondering what it would be like to have gotten to have both of my babies, I often question if this is why he has some emotional issues and seems lost at times. However he now has a baby sister who he dotes on and I couldn’t love my children anymore than I do, all of them, even the three who couldn’t stay as they made me a mother too.”

“I had 2 failed IVF treatments before a ‘fluke’ natural pregnancy. I had 2 very early scans at the fertility clinic as I was still officially a patient there. A heartbeat was seen both times. I was on top of the world going to my 12 week scan – I had a good little bump! It was a missed miscarriage and my baby’s heart had probably stopped just after the 2nd scan I had had at about 8 weeks.

I literally went from the highest to the lowest point in my life in 1 minute.

At the time the hospital had crematorium services for all little ones lost each month unless you wanted your own ‘funeral’. That was incredibly hard as I didn’t want it but felt it was my only choice. There was a small white coffin filled with ‘the December babies’. It gave me no comfort but I would have felt so guilty not attending. I believe there are other options now thankfully.

Fast forward and my 4th and 5th IVF attempts worked with my second child being a frozen embryo from the cycle that brought me my son. I hit the lottery twice!”

“Reading through all of your experiences has brought tears to my eyes. We move on with our lives, sometimes the pain resurfaces, the what if’s and that sense of loss and the tears flow.

I lost two babies, one at 12 weeks and another at 15 weeks. Times have changed, hopefully for the better. One of the times I was alone, no heartbeat on the scan. Was told they’d send for the bereavement midwife and she drew something on the back of a tissue box, she was trying the tell me I had a split uterus…it made no sense at all. Truly awful! That was 27 years ago. Care has improved. Thank goodness.”

“I was 16 and I had accepted and was ready for the challenge of raising a child. At 15 weeks I had some concerns, raised them with my GP and midwife. At 19 weeks and 5 days my pregnancy was over. My baby had a lot of complications, mainly through lack of amniotic fluid. My experience at the time I gave birth to my little boy was horrific. Not for what was happening, but the care I received.

I was put into a side room and not told what to expect at all – I wasn’t at a stage of pregnancy to have looked into what to expect in labour. I was pumped with diamorphine all day, then I thought I needed the toilet. In my drugged up daze, I got up to go to the toilet but only got so far along corridor – I literally had to spread my legs and I gave birth there. I cried out but was told to quieten down so not to upset other patients. I was taken into a room, cleaned up and consoled but then I was put in a room to the side of a postnatal ward. I had an empty cot in my room and I spent the night listening to perfect newborns crying all night.”

“A week ago today I found out that my bump was no more, but only 3 days since it actually left my body.  I’ve removed my watch today because I don’t need to know what time it is, because I know where I was, the time it was and how overwhelming it was last week.

My eyes stung so much that day, I looked old and tired and ugly. My head ached. I didn’t want to look like I had a baby up my jumper I just wanted to hide it under baggy shapeless tents.

My days are measured on how many tissues I’ve used up.
I’m getting better. Only 2 today, but it’s only 11am.

I thought I’d want to be back at work this week, to distract me, but I know it’s not the right thing to do.  I forgot something yesterday, I’d said to my husband, right I’m going to do this, this and this next.  But when I went to remember the 3rd thing, I forgotten it.  It was just gone from my mind.  I got upset, thinking that I was losing it and that I’d never get back to work.
Today I’m writing things down, so that I don’t forget.

We’ve been listening to a lot of music, or rather I’ve been sticking music on (sometimes a random mix of songs, other times specific albums).  It has highs and lows.  Lyrical songs make me think too much and I get upset about the words, what they mean, and what they mean now.  Then there are other songs that make me sing along, and I don’t take much notice of the words; Oh, everything is average nowadays

One in particular has been played on BBC6 Music, and it’s got to me so much now that I’m not sure I want to listen to it (the radio station) for now.  It’s by a band called Empire of the Sun, and the song’s called Alive.  The song reminds me of how I felt about being pregnant; Loving every minute cos you make me feel so alive, alive. It’s a lovely uplifting song, but it’s just reminding me about how I was feeling at the time, laid back, relaxed, happy, healthy and full of baby.

I can’t talk about the baby as she.
I talk about it as an it.
I say mine wasn’t a real baby because a real baby comes out alive at the end, after 9 months and not 5 and a bit months.
We looked at her. But only the day after.
It didn’t look like a baby to me. She didn’t look like the baby I wanted to have.
She just wasn’t big enough.
We are getting as many tests done as possible to find out what happened and why.
I just want to fill my belly full of baby again, as soon as possible.

We have decided that it needs to be called something other than Baby Vincent so we have to now think of a name for it. For her.  We had only just started looking at names and seem to keep putting it off, or rather avoiding it. Avoiding the inevitable.

I’m still bleeding. Maternity pads are all pitched at New Mum.  Not me. Not yet.
My breasts are hard and tender, engorged with milk like I should doing what a new mum does. Not me. Not yet.

I’ve been potting up vegetables, I suppose my allotment is getting some benefits out of all this. Everytime I find a dead plant I look at it and think, you didn’t make it this time….here’s another one that didn’t make it and I feel a certain sadness, like I know how it feels.”

“My baby died in his hospital when he was 3 days old. It was his second surgery in this short life. The care we received was phenomenal – we were communicated with well and with compassion, we were encouraged to balance rest with spending time with him in PICU before his surgery. After he died, the surgical team who had been operating for 12 hours, came to see us – they cried with us. My son’s nurse was wonderfully caring and after we cuddled him and said our goodbyes, we left him with her so she could bathe and change him – something we were invited to do but I couldn’t face seeing his post surgery body. I passionately believe the care we receive, the words that are used when our baby dies make all the difference – we will carry them for the rest of our life. I still remember being shushed by a member of staff when we were waiting for our dead son to be brought to us from the operating theatre. I was really angry about that for a while but I had to let that go because everyone else had been so caring.

Everyone who has lost a baby will have their own unique story to tell – the greatest gift we can give is to let parents tell their story.